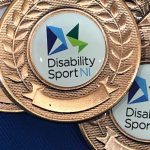 Congratulations to Sean Kelly on this fantastic achievement! A great ambassador for the school and his club!